Readers, I planned to write this blog in some sort of chronological order. But then as they say, best laid plans of mice and men… I will return to my original plan, but am just compelled to write about recent events.

Recent events that may, i’m afraid shatter the illusion that riding is all about hard work and determination.  That definitely plays a large part, but also, especially as a hobby rider,  having a ‘tool’ that works with you and you can work with, is as important as all the hours spent training, riding and competing.

Now the next bit ( no pun intended) may seem a bit horsey, but please stay with me, as with anything in life, the quick fix, the free lunch, and any other relevant platitude, does not always, in the long term yield the desired results.

Here, as they say, is the technical bit… for about seven days i’d been riding Jay in a KK ultra universal bit, commonly known as a ‘gag’ but doesn’t universal bit sound so much nicer? He’d been going like a dream in it on the flat, and by that, for the non horsey readers, I mean that I can get him looking really smart and really soft, with no more than a little bit of leg action and the odd twiddle of the reins.  This seemed like a revelation compared to my previous bit, which felt like I had to go ten rounds with the equivalent of a 650kg Mike Tyson, and that’s, surely enough to make anyone’s eyes water.

So far so good. I decided to try the new (and expensive) bit out in my jumping lesson.  The jumping was going well, and I was still thinking that I couldn’t believe that it had taken me over three years to discover this ‘wonder’ gadget. .

It reminded me of a similar ‘waterloo’ i’d encountered climbing, although since riding I realise that rock climbing is ‘easier’ in the sense that you only have one mind and body to control. But the ‘block’ was similar in that no matter how much my knowledge of physics told me that a rock boot with sticky rubber sole could hold my bodyweight at a certain angle on a sheer piece of rock, ( a move called smearing) my brain found it hard to accept..

I encountered a similar ‘block’ on my little Honda NSR (at that time a half power GP motorbike), when I realised that the weight of me, my bike, and in reality my whole existence, relied on a bit of rubber about the size of the palm of my hand, that was in contact with the road.

But in reality, smearing in rock climbing and banking on a bike are similar as they both rely on the physics, namely the angle of dangle and stickiness/softness of rubber.

But none of this prior knowledge helps me in my showjumping quest and the point of this post, which is,  I suppose that there are no shortcuts in life. I know this, and am irritated by the fact that for one or two glorious moments I thought I might be wrong.

Why did I think I was wrong? well, with the loveliest collected canter comes great responsibility. That beautiful canter generated by a stronger bit, means that tightening in panic, when faced with a difficult line is simply not an option. Otherwise you’re very likely to end up where I did tonight, which is on the floor,(twice) with sand in my knickers, eyes, teeth and bra.

So I’m back to the good old snaffle. which is disappointing, as I had a taste of feeling like a proper rider, which I admit was amazing, if short lived.

And you know what the real joke is? it’s this, that I can get Jay to go fantastically on the flat in the aforementioned universal  bit, but this is not dressage legal.

As I said in a previous post, I am not an advocate of authority and think there should be an ‘underclass’ of dressage that allows any type of bit, to allow the less than perfect rider some sense of achievement.

So, how does this post resonate with non riders, well, gadgets and quick fixes, whilst an attractive diversion, can never really hide the real issues.

Its a bit like the dutch boy with his finger in the dyke, you block one hole and another couple or more burst through, impromptu.

My last post has been bugging me, not the content so much, but the name, ‘the beginning’ as of course this relates merely to the start of my show jumping folly.  The real beginning began a long, long time ago! 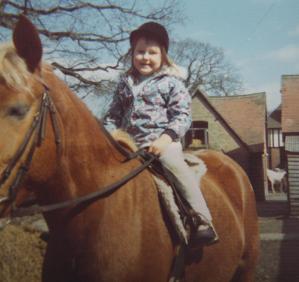 In fact, probably around about the time of this photo, taken in 1974. I think the anorak is a bit of a giveaway, but it would probably be ‘retro’ these days. I was about five years old, somewhere in the New Forest and can’t remember the name of the obliging, rather sleepy (but ginger!) pony.  These were the good old pre-health and safety days, when a riding hat plonked on the head was good enough (elastic chin straps started to appear a few years later).

These were the same days when myself and my sister crossed each other going in different directions over the middle part of a triple jump, it could catch on…. (guess who was going the wrong way?) well it wasn’t older sis.

A couple of things strike me about this photo, number one, is that old habits die-hard, and I am guilty of riding without tying my hair back.  However, having been reprimanded quite sharply only a few months back by Pammy Hutton (dressage trainer extraordinaire) for committing the same crime, I am somewhat of a reformed character on this front, proof that you can teach an old nag new tricks.  I think the actual admonishment that rang out over the large indoor school at Talland, went something like this ‘the whole picture, Diana, would be greatly improved if you TIED YOUR HAIR BACK’.  I suddenly felt 12 years old again.

I got into the same trouble at school, for similar reasons, I never wanted to tie my hair back, pull my socks up or wear my navy knickers.  Now for anyone who has not had the ‘pleasure’ of navy knickers, they consisted of a rather large, definitely unsexy (I think this was the whole point) pair of over knickers that the nuns at my school encouraged us to wear, in an attempt to protect our modesty…

It seemed particularly important to don said knickers for any kind of sport, and the image of me being made to bounce up and down on a trampoline in a rather brief pair of bright red briefs, will stay with me to the grave.  This was the ‘punishment’ dished out to me by one very exasperated trampolining instructor.  I admit it, I was infuriatingly insolent as a teenager, authority was just not something I saw the point in.  I wonder if I have the same effect on my current tutors?

But I digress, this post was not really meant to be all about knickers, navy or otherwise.  So back to the second thing that strikes me about my five-year old self, and that is the sense of joy.  Pure joy, in a (much) younger version of me, living in, and enjoying the moment, a young Di who has not yet learnt to be so relentlessly hard on herself.  This joy and this photo, has kept me going in my darkest moments with Jay, as this little snapshot from the past, more than any words, reminds me of why I ride.

On October 16, 2009, as I sat waiting for Jay to arrive on a new yard, I had a similar sense of joy and excitement, if somewhat tempered by the irritatingly adult emotion, apprehension.

How long would it take for my new horsey compatriots to twig, that no matter how much I bleat and moan about my lack of ability, woe betide anyone who tries to stop me in my tracks.  The true force of my grit and determination, is something I tend to keep under wraps, even from myself. Which leads me to think that maybe my self assessment as a sanguine, laid back character, is a little more fantasy and a little less fact.

Being a shy child has led me to believe that I am shy as an adult, but as anyone who knows me can verify, once I get going, I am fairly unstoppable in the conversational department.  So I think that what I’m not very good at is what I’ll call ‘first contact’ the very first words that you utter to new people, as so often those first sentences can rank you (temporarily at least) anywhere between hero or zero.

Knowledge of this, often results in typical ‘over-compensation’ as demonstrated on that first weekend as I strode ‘mock’ confidently up to a couple of lovely ladies, getting ready to head out on their weekend hack, and promptly invited myself along.  This boldness, well actually bare faced cheek, amounted in the end to madness.  Not only did I ruin their weekend hack, reducing what should have been a canter filled jolly at pace along the Wansdyke, to a steady, broncing walk (I’ve still not been there since), but I also managed to scare myself and probably Jay silly.  I spent three-quarters of that hack hoping, praying and promising to the ‘god’ of riders in distress that if I made it home without real mishap, I’d not be so foolhardy again.

There are few things, for a novice rider at least, as disconcerting as sitting on an exploding, unknown, bomb of a horse, wondering if the knock down price paid was still too much.

We made it back, but not before Jay had bronced three times, each time resulting in me losing one or both of my stirrups and landing half way up Jay’s neck. Bronc #1 at the cows in the field, bronc #2 at the gate as he thought he was being left behind, and bronc #3 on the Wansdyke itself with a rather ferocious ditch on one side, when my companions tried a trot.At least being scared blocked out what would have been overwhelming embarrassment. 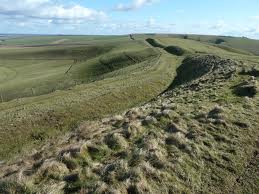 The Wansdyke, beautiful place but will forever fill me with horror

I rode back, as tight, tense and at the same level of breaking point as Peter Stringfellow’s thong, and had never been quite so relieved to be back on the yard on terra-firma.

This was my first inkling that the absence of ‘good to hack’ anywhere in the advertisement, had some real significance.